Home/Investing • Life • Money /Are You Biased? 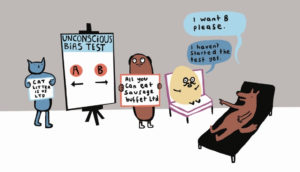 It’s not so obvious always.

Of course, you are! We all are.  We just don’t want to admit it.   The biases we have are so hidden and yet, so effective, that they pretty much control how we think, speak and act in many situations.   That’s a pretty tall claim, I know.  In my life and in my corporate experience, I have often found that those who feel they are objective or unbiased often have deep-rooted biases that they think actually make them unbiased!  Ironical, isn’t it?  Such is the nature of cognitive bias (as psychologists call them) that it spares no one on its path.  They can stop you from investing efficiently.   They are enemies on your path to financial independence.

One of the goals I created for Ten Factorial Rocks is to understand the ‘oddities’ in life and try to make them even.  This point is one of my 10 factors.   Cognitive biases are very much part of the ‘oddities’ we all experience as human beings.   There are many cognitive biases so my intention is not to turn this into a psychology classroom.  I will only focus on those biases that hurt our approach to work, saving and investing.

The first bias I worry about is survivorship bias.   One example of this is the hype on entrepreneurship, which is here.   But this bias extends well beyond that example.

There is an old saying that history is written by the winners.  And it essentially captures what this bias is about.  It is human nature to place an enormous importance to the few people, events and institutions that have survived among the hundreds or thousands who have failed in similar set of circumstances.   They deserve the attention for overcoming the odds they faced but that doesn’t change the odds for everyone else. 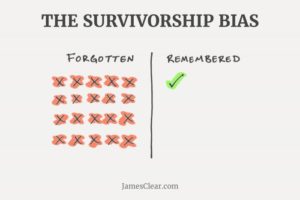 We remember only the winners. (Image credit: jamesclear.com)

This is a particularly deceptive bias because it causes you to over-play the likelihood of rare events.   What may realistically have just a 1% chance of success appears to be much higher, when you allow the 1% ‘winner’ to dominate public attention and your thought process.

The survivorship bias is particularly harmful when you are investing.  Despite the thousands of mutual fund managers that lag the benchmark index, we remember Bill Miller and his track record at Legg Mason Capital where he consistently beat the S&P 500 index returns over 15 years.  That put him in the top 1% of money managers in the industry.  Bill Miller is one of the household names among many retail investors, reaching the peak of his fame in the 1990s and 2000s.   Most investors chased active mutual funds inspired by the success story of Bill Miller and thought their own active mutual funds can do the same.   Many piled on to his successful fund Legg Mason Value Trust.  But his fund couldn’t sustain this record and he eventually left Legg Mason.

Another example of surviorship bias is the high-flying hedge fund industry.  Warren Buffett issued a challenge to the hedge fund industry that over a 10-year period from Jan. 1, 2008, the S&P 500 will beat a portfolio of hedge funds. So far, he is handily winning that bet.  One of the primary reasons why Buffett was confident was because of the usurious fee structure of the hedge fund industry.   Most hedge funds charge an atrocious 2% of assets as annual fees and on top of this, they skim 20% of returns above an agreed baseline return (say, 6%).  See how this works:

Assume the S&P 500 generates a 10% return (including dividends) in a given year.   By investing in a very low cost index fund that charges 0.1% fees, an investor will realize a 9.9% effective return (10 – 0.1).   So, if all the hedge fund did was invest in the S&P 500 index, the same investor will realize a return of only 7.6% (10 – 2 – 20% of (8-6)).   This under-performance (of 2.3%) is massive and will crucify your investment portfolio over the long term.   Clearly, no egoistic hedge fund manager will agree to taking investor money and just put it in an index fund.  That doesn’t justify their fat salaries and bonuses.  So, what they are paid obscene amounts to do is to generate alpha – the extra return over an index fund for the same level of risk (that is, try to beat the efficient frontier).   This alpha is about as common as the dodo.

Have you seen this lately?

Among the hundreds of hedge funds out there, rare ones like Baupost or Bridgewater Associates do generate alpha for their investors.   They also manage billions of investor funds (Bridgewater manages over $150 billion, and they take money only from large institutional clients like pension funds, as they don’t want the hassle of dealing with small investors).   These guys are at the top of their game.  They get the attention they deserve because they have proven themselves to generate alpha for their clients.   For every such elite hedge fund, there are hundreds that under-perform the index.  Importantly, as a group, the entire hedge fund industry under-performs a diversified index like S&P 500, thanks to their atrocious ‘2/20’ fee structure and frequent trading causing its own frictions and tax issues.  You don’t hear about the hundreds of hedge funds that have closed down due to bad performance because they did not survive to tell their tale.   An average investor hears about the top billionaire hedge fund gurus and thinks they have all the ‘secret sauce’ to make money in the equity markets.  This is survivorship bias in action again.

Survivorship bias is often intertwined with recency bias, which means that we tend to give more importance to recent events than those in the distant past.  Importance, of course, has nothing to do with when an event happened, but that’s not how our brain rates things.   The market correction of Jan-Feb 2016 caused many investors to bail out of the market or not put money in, so they missed out on all the market gains since then.   Going back a few years, the great recession of 2008-09 causing 40%+ decline in stock prices has scarred nearly a generation of investors to avoid the stock market entirely.   In so doing, they have missed the massive gains the market has delivered from April 2009 till date.   Our bias for recent events makes survivorship a pervasive bias in our society.

How do we overcome this bias?

The first step is to recognize this bias exists and is serious enough to work on.   If you don’t even acknowledge the problem, the solution will never come.

The best way to overcome survivorship bias is to think in terms of probabilities (odds) whenever you hear a nice story or event that makes you go ‘wow’.   If your colleague says “My stock went up 100% in 6 months, so how did you do?”, think about the probability of picking a stock that can do the same over the next 6 months (or) whether your colleague knew this at the time the stock was bought (or) even how many stocks lost money in the same colleague’s portfolio, resulting in his overall portfolio lagging your modest index investment.  The next time you read a news story about Bill Miller or similar star fund manager, think about the hundreds of unknown fund managers who are failing to eke out alpha and are dying for investor attention.

Probabilistic thinking is the best way of evaluating the likelihood of an event repeating or a success story happening again.  Applying factual probabilities is what I did to analyze the entrepreneurship hype.   Journalists and reporters are paid to sensationalize every story to get maximum visibility and attention, so they don’t care about how likely is it to happen for you.

Another way to work on this bias is to look for ‘special triggers’ (or ‘catalysts’, if you want to get technical).   What I mean here is look for something in that success story whose foundation was laid long ago, away from the glare of the media.   It is news-worthy to write about a couple that saved $1,000,000 but the lesson in that story is not the assets they have, but the regular discipline they followed for years by ensuring they always saved a large percentage of their income.   In all those years, this discipline showed marginal results (not news-worthy), until the miracle of compounding took over and one day, they seem to have ‘quickly’ amassed their $1 million fortune.   Years of saving discipline is their special trigger behavior (or catalyst), which is the lesson often missed from this type of story. Unfortunately, that lesson is seldom learned.   Identifying the special trigger(s) and the real probability of doing the same in your life will tell you whether you can overcome the survivorship bias and achieve similar success.