Crony capitalism and stifling bureaucracy are the twin curses that block the progress of many developing and emerging countries.  These two curses lead to a troubling disease – a parallel economy that runs on cash outside the formal economy and tax authorities.  This underground economy runs on illicit or unexplained cash, but leads to real inflation in the main economy, hurting honest taxpayers and businesses.   Indians call this ‘black money’. Some estimates are it is as big as about 20-25% of the country’s GDP of US$ 2 trillion, and until couple years ago, it was as much as 75%!   Even at 25%, just imagine, $500 billion sloshing around, unaccounted for and un-traced.

One portion of this is believed to be in Switzerland, Mauritius and other tax havens but a much bigger portion is buried deep within the Indian economy.   This black money in India is generated by corruption and illegal activities – and gets stored as cash, jewelry and real estate under false identities.  Another sizable portion of it is counterfeit money, which is used to finance illegal trade and terrorism. The two highest-value currencies in circulation in India, INR 500 ($7.50) and INR 1000 ($15) notes, together constitute an amazing 86% of the value of cash used in India. 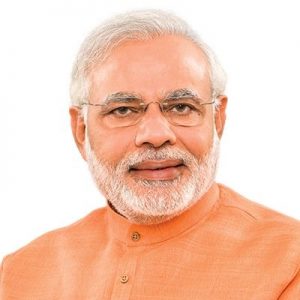 India’s Prime Minister Narendra Modi. Love him or hate him, the man is bold.

While the U.S. was engaged in a nail-biting election, on Nov. 8, 2016, the Prime Minister of India, Narendra Modi, appeared on the screens of a billion people in a nationally televised address.   With the ominous-sounding words “From the stroke of midnight tonight…”, he instantly rendered useless the 500 and 1000 rupee notes in circulation.   By just one announcement, 86% of India’s currency notes in circulation became practically worthless (except to deposit into banks and for emergency medical care, only till Dec. 31, 2016). The reasons for this bold move, he offered, were to eradicate black and counterfeit money in the economy and to give a ‘body blow’ to terror finance and hoarders of illicit wealth. 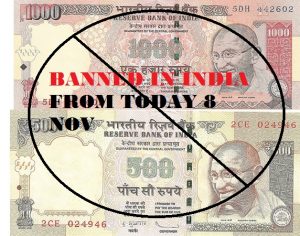 Pictures like this were circulating on social media minutes after the TV announcement (image: mystudycorner.net)

This sort of thing has been tried before, but in much smaller economies like Sri Lanka and some African countries, largely out of desperation.  In a large, elected, fast-growing democracy whose economy is already among the world’s largest, the impact will be huge.   The implications of this move, my friends tell me, are still not fully evident.   For now, the common people of India have had to stand in long lines to deposit the old currency into their bank accounts (or open one first, as nearly half the population don’t have bank accounts) and provide unique IDs to link these accounts to the country’s tax base.

The government has announced a number of steps to ease the transition but the deadline to deposit money is end of this year, after which, the paper currency has no use and is not smooth enough to be used as toilet paper.  They could purchase gold, but that too has limits to curb high value transactions.  Maybe the illegal hoarders will pool together and build a golden throne with it?  In the U.S. and Canada, we don’t have a similar problem because most of the country is well-banked and payments are largely electronic. 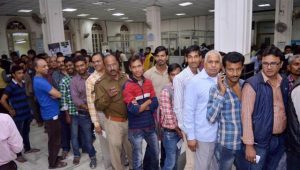 Waiting to deposit: Indian banks have a steady stream of cash coming in daily.

Within just a couple of weeks of this historic announcement, Indian banks have mopped up over 5 trillion rupees (over $70 billion!) by way of individual deposits into the banking system.   When you have this kind of liquidity pumped into the system, it’s like the massive quantitative easing (QE) that U.S. Federal Reserve did.   After this move, interest rates are declining in India even without any central bank intervention.   Nearly 30-60% of this money will directly go into government coffers (by way of taxes and penalties) – a price that illegal money hoarders have to pay to ‘clean up’ the remaining money.

Think of it as the largest government-sponsored money laundering program!  Except that this ‘laundering’ helps the formal economy and the country’s growth.  So, it is an impressive, bold move by the Indian government.   The Indian Prime Minister wants a billion Indians to get online and make all payments electronically, and move towards a ‘less cash’ society.  This way, the government can track (and potentially tax) financial transactions, especially major ones.

When a $2 trillion economy goes through this kind of disruptive change, you can imagine the naysayers and doomsday pundits come out of woodwork.  I am no economist but I think the short-term pain will help the country in many ways.

Of course, this is not enough but looks like they are also trying to enforce law on proxy real estate, a tool that serves the black economy.  Until all the ‘sources’ and ‘uses’ of substantial illicit money are conquered, I don’t believe that corruption and illegal hoarding of wealth can be stopped in any developing and emerging markets in Asia and Africa. This is the cause for the high inequality in wealth in those countries.  Yet, this is a bold experiment in the history of a large market economy, and the effects of this will be studied in many world governments and universities for decades to come.

If your FIRE dream calls for retiring in an emerging country, these are the sorts of disruptions you should learn to live with and try to plan for.  These can sometimes work in your favor as well but being prepared is critical.