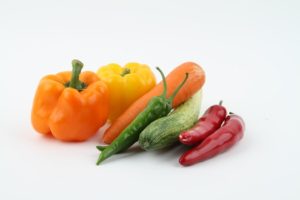 Is this kid the carrot among TFR peppers?

“Life is like a box of chocolates, you never know what’cha gonna get.”  Thus declared the famous Forrest Gump, in a rare glimpse of his philosophical mettle way beyond his portrayed capabilities in the film.   That quote resonated for me recently when I was speaking with my 10-year old kid for his ‘sub par’ performance in his exams recently.

I had just returned from a business trip late Saturday and was informed the next morning that my 5th grader got an A- in his math test, a subject he loves and where he always gets an A+.

It was Sunday afternoon and we were both driving around in the neighborhood to do some errands followed by ice cream (that was Junior’s incentive to join me on the drive).   I extrapolated the inference of his A- grade in Math to how success comes to those who put in the extra effort and settle for nothing less than A+ in what they like.   I took the conversation far, but mildly, into how competitive the world is, and there are thousands of kids who fall in the ‘big’ gap between A+ and A-.   I gave examples of how people fail to get into Harvard (which my kid likes only because of the way the name rolls off his tongue!) and similar top universities of the world, all for missing just a point in their competitive exam scores.  Yeah, talk about piling it on a 10-year old.

I ended my (unsolicited) sermon with the line “In this world, you need to first become successful and then be happy with the life you make with that success”.  I was rather proud of myself that I did the fatherly thing and gave a life lesson to set my son on a path to success in this hyper-competitive world.

He pondered for a moment and asked me back, “What’s wrong with the other way around?”  I said “What do you mean?” to which he replied,  “Dad, what’s wrong with being happy with whatever success you get?“.   With that, he ran out of the car to play with his friends who had gathered home by that time.

In one line, he distilled the essence of the world’s major philosophical and spiritual paths and also, stumped his old man.   Be content with whatever life gives you, what could I say to this 10-year old?

What do you think?  Take the poll below (click on the answer that appeals to you) and share your views in comments.