Home/Investing • Money • News & Analysis /What To Do With Gilead?

What To Do With Gilead? 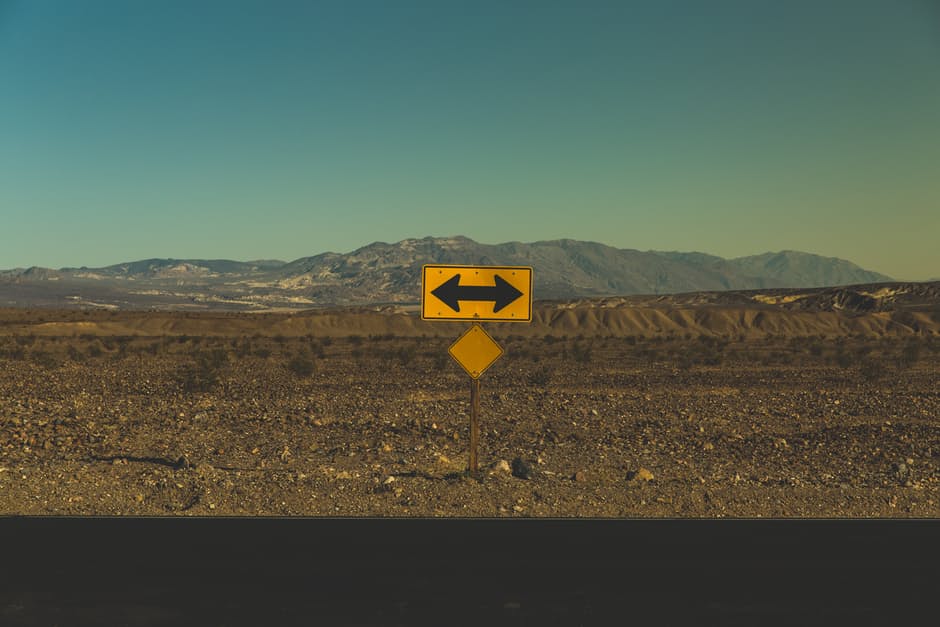 Which way should I go?  Help TFR decide.

This website is fortunate to have high quality of visitors, based on what the analytics tell me.  TFR is also fortunate to have a global audience and people from various industries (both working and retired).  So, I am counting on your advice in this post.

This is my first attempt at discussing a specific stock holding of mine.  I have hinted in the past at my stock-heavy portfolio and my preference for dividend growth investing in comments of other blogs.  Whether you choose the stock indexing route or the dividend growth route, patience is a critical need.  Especially, the ability to handle extended ‘winters’ in your selected investments is a key requirement for long-term success.   That’s why it is called “buy and hold”, which in some ways, needs a better risk tolerance.

However, there comes a point where a stock that you feel should be firing on all cylinders under a favorable macro-economic climate now (low interest rates) and when the broader market (S&P 500) is also hitting new peaks, is doing the exact opposite.  I want to focus today on such company: Gilead Sciences (ticker: GILD) – a company with over $32 billion in revenues in 2015.  Gilead is in the league of what people in Wall Street call a ‘mega-cap’ company ($100 billion+ in market value).   For those who don’t know the company, a brief description follows:

That sounds good right?….except that it’s been nothing but tough times for the company lately.   Their primary revenue-drivers for liver disease products (mainly for Hepatitis-C infections) are the wonder-drugs Harvoni and Sovaldi, which are now facing revenue decline due to both competition and pricing pressure by Government medical agencies.  While the pipeline and their intellectual property seems to be good, there is a good chance that revenues from these two products continue to fall as Gilead’s drug pricing continues to fall. 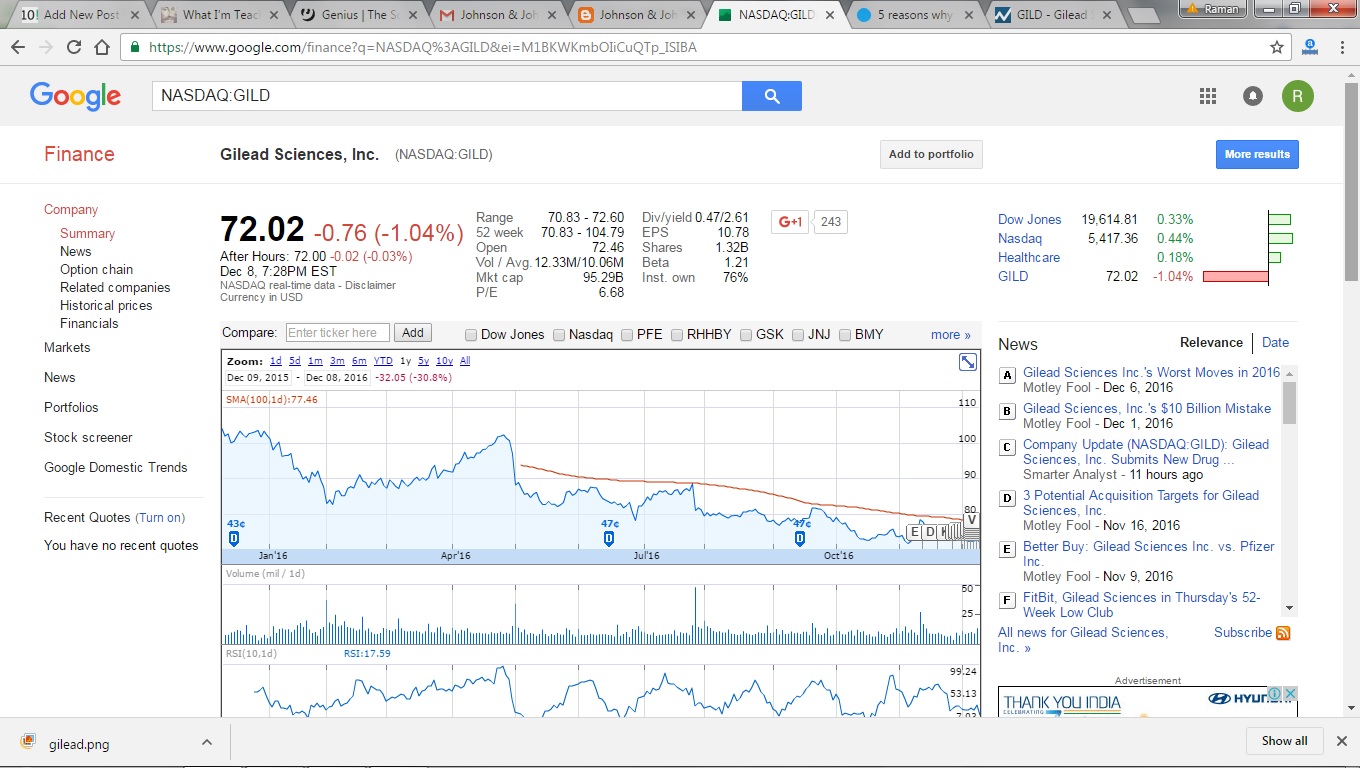 From over $100, it’s now down to $72, a massive decline of 30% in a year when the S&P 500 has given 12% return till date.   These are times that test a long-term investor’s patience.   We learn to stay calm but also dig deeper into the reasons.  From what I could see, yes, there is the Harvoni/Sovaldi decline in revenues but Gilead’s pipeline seems to be strong.   The company is known for putting science and consumer interests ahead of near-term profits – a type of company that can endure short-term pain for long-term rewards.   Johnson & Johnson is another major in the pharma space that comes to mind with similar philosophy.

I bought into Gilead when the stock was around $90, thinking it is very attractively priced (8.3 P/E ratio when I bought) for a company with this kind of pipeline.  It appears the magnitude of revenue decline of the wonder drugs Harvoni/Sovaldi has caught everyone by surprise, including the company.   It’s now trading at a P/E of just 6.68 (15% earnings yield), when S&P 500 P/E is over 25 (<4% earnings yield)!  It looks to me like the market has entirely ignored the entire pipeline of drugs in development at Gilead, and focused only the revenue declines in Harvoni/Sovaldi.  Even if the earnings for Gilead declines by 50% in the coming year (which nobody expects as these drugs are now getting into other global markets and new launches are underway), the P/E ratio  would still be only 13.3 at the current stock price, that is, half of S&P 500’s P/E.  Is a company with Gilead’s track record not even worth half the P/E ratio of the average S&P 500 company? 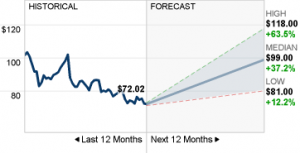 Hockey legend Wayne Gretsky said that he skates to where the puck is going to be, not where it is right now.  As investors, we must do the same.  The past is irrelevant for stock prices. GILD’s price decline has hurt my portfolio but their growing dividends (9.3% dividend increase in June 2016, with room for more), current dividend yield of 2.6% and diversified prospects are telling me to give more time to the company.   I also looked at the analysts following Gilead.  Their views are divergent, as expected, but everyone feels the next 12 months should be better for the company.   The forecast chart shows that even the most conservative analyst feels there is a 12% price improvement possible ($81, from $72 now).

Comparing this to S&P 500’s projections for next year, which some feel will be around 2300 (from just over 2200 now), so about 4.5% price gain.  Both S&P 500’s and GILD’s projected gain exclude dividends. Dividend yields aren’t far apart for both anyway (S&P 500 dividend yield is around 2% and GILD is at 2.6%), so the difference in total returns should largely match stock price returns (with the important caveat that both are projections, so nobody knows for sure).

Having suffered the price hit already, I feel a better decision for me is to stick with Gilead for another year to see if the prospects improve.   What do you think?  Should I stick with Gilead or cut my losses and run?  What are the alternative investments you would suggest (both within and outside the healthcare sector)? If you don’t wish to post a public comment, you can email me instead using the Contact Page with your views.

7 comments on “What To Do With Gilead?”