A wonder of the world beckons.

In my earlier article on working abroad, I mentioned the example of my American friend living and working in India.   In the same article, I mentioned that India does not offer permanent residency or retirement visas for foreign citizens, unless they can prove Indian ancestry.  My friend sent me an article last night that I want to share with you.

Guess what?  Looks like the Indian government deliberated on my post and came up with this announcement. 🙂

But there is a problem.

A $1.5 million problem to be precise.

India is the fastest growing emerging market and the world’s largest democracy.  It is one of the oldest civilizations in the world but paradoxically, has the globe’s youngest demographic profile.   Nearly 600 million people in India are under the age of 30!  Let that sink in for a moment.

If you are a leader of the world’s largest ‘young’ country lagging on many development metrics, what should be your Number 1 priority?  Job creation, of course.  Clearly, they don’t need immigrants when their own native workforce needs employment opportunities.   Hundreds of millions of new jobs are required in India for the country to effectively use its demographic dividend (Detailed PDF report on India’s demographic dividend, in case you want to read more). 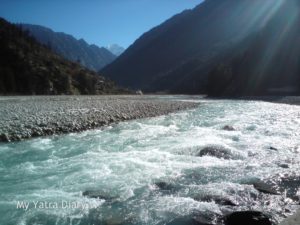 River Ganga flowing from the Himalayas.

The government also knows that India has a rich cultural heritage that attracts millions of visitors around the world. It is also a global spiritual destination with its thousands of temples (this one for example, rumored to be second richest in the world after The Vatican), ashrams (example on the banks of India’s holy river Ganga) and communes (example) of various types.   India has the largest English speaking population in the world, and while some speak with eloquent fluency, most speak quite understandably and so, it is possible to get by with English in India.  However, learning a bit of the local language always helps whichever country you go to.   India also offers a relatively lower cost of living in Asia, especially if you avoid the mega cities; the spiritual retreats are not in the cities anyway.

So, quite understandably, by the latest announcement, the Indian government has come up with a program that tries to address many of the above points.

While details are still awaited, they are apparently working on a program to give permanent residency with multiple visit options to investors who:

That is a rather steep target for many retirement-oriented people.   However, given the relatively high interest rates in India (10%+ for commercial loans), the returns from this investment would also be no less than the interest rates.   At least, that’s what I would hope.   Otherwise, people can game the system by putting in this money in a safe bank or money market fund and earn the secure 8-9% returns they currently offer in India.   To comply on the jobs front, an investor can cleverly do a deal with a local business to take 20 people on a mutual work arrangement that serves both the investor’s and local business’s interests.  I don’t how they will track job creation, but even if they do carefully, given the per capita annual income of just over $5,000, it should be easily possible to create at least 20 jobs for anyone investing as much as $1.5 million in a business venture in India.   The main point, of course, is this is a lot more expensive than the retirement options in Malaysia, Thailand and parts of Latin America.

Anyway, one more retirement destination has opened up in the world, but reserved for those who can invest a cool $1.5 million.

I thought I should share this update as soon as I was informed of this by my friend.  Best wishes in your 10! Journey.

13 comments on “Update: Another Destination Emerges”