Please read Part 1 first to give you a background to this post.   This series is my attempt to look at important cognitive biases that prevent us from taking optimal decisions in life, career and investing. 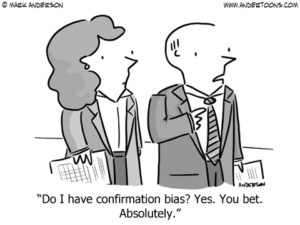 Our bias to conquer today is the Confirmation Bias.   As an investor or as an employee, we have all fallen victim to this at one time or another, or if you are like me, repeatedly!

We all like consistency in our life.  It simplifies our thinking and gives us a routine to follow.   While habitual consistency is our brain’s ‘low energy’ way to get through our daily life, you pay a heavy price for it when it comes to important decisions.   Confirmation Bias is our innate urge to look for those things that confirm your pre-conceived ideas/notions/decisions and ignore other things that raise red flags.   This bias dulls key facts that go against ideas and conclusions that we hold dear.

Confirmation Bias is our brain’s ‘yes’ man, our sycophant and our ‘feel good’ compadre.   They keep us moving with the herd and also, can lead us astray! 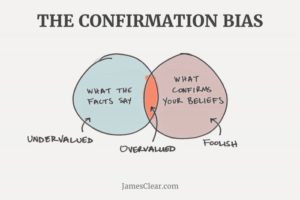 The world is a complex place.  One data point that you find in favor of your biased belief doesn’t change the fact that you may be ignoring three other data points that go directly against your view.  Worse, your brain can trick you into searching for and holding tightly that one favorable data point while quietly blocking out others that go against your belief.  That’s what makes confirmation bias serious, and it can lead otherwise smart people into making not-so-smart decisions.

Where it works and where it doesn’t

We search for simple ways to deal with complexity.  It’s natural to do this and even efficient at times.   If you are offered the choice of 30 different bagels and 10 different types of seasoned spreads to go with them, the sheer number of options are 300 bagel-spread combinations for your breakfast at your friendly neighborhood joint.   Who will remember to try all this?  The most natural thing to do is to try a few combinations for the first few days on your daily commute to office and then, choose one combination that you simply stick with.  This is why studies show that while choice is good, too much choice leads to bad or suboptimal decisions.  At the very least, choices beyond a point don’t increase your satisfaction levels.

What if some friend or colleague says, “you gotta have the toasted sesame bagel with minty cream cheese – boy, that hits the spot!”  Instantly, they’ve narrowed down 300 choices to just one for you.  And unless you have a specific aversion to anything they said, this will likely become your breakfast choice whenever you walk into that restaurant.  If this comes from a person you like, your choice is sealed.   You may have liked the pumpernickel bagel with sun-dried tomato cream cheese even better, but that may be combo number 267 (of 300) you may never get to – as the book The Paradox of Choice (Why More is Less) nicely explains.  Hitting the combination #267 by persistent trial is what perfectionists do, but they don’t have a good life as J.D. Roth rightly says.  Besides, who wants to think so much for breakfast? You wanna catch the morning bus, train or the highway before rush hour, right?  You colleague has just made the choice simpler for you. 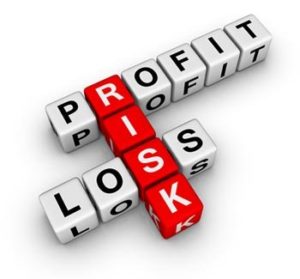 Investments aren’t as harmless like breakfast choices, unfortunately.   We are often told what is good by people who don’t have any vested interest in our financial success.  Many of these people are also clever as they start their message with something you already agree with, say, do you want to retire early? Or how about avoiding all risk in your investments?  Getting you started saying ‘yes’ is their goal.  It is a powerful sales technique to tap into the consistency principle and cause confirmation bias of the buyer.

Confirmation bias is especially strong whenever a small win precedes a big loss.  Imagine you play the slot machine in Vegas and on the first try with a coin, you win 5 coins back.  The odds of winning haven’t changed at all but the confirmation you received by this win makes you forget the real odds and you keep playing till you not only lose what you won but much more.  This behavior is very common.  After the first win, you simply imagine it’s your lucky day and keep trying for that luck to show up again, which unfortunately never comes until suddenly, you realize you are deep in the hole and leave frustrated.

Confirmation bias is also why ‘momentum trading‘ strategies work because increase in a stock’s price movement triggers more purchases along the same direction as new buyers feel confirmed by the choice of earlier buyers.  The problem is, this can get carried to absurd levels when someone (usually a smart institutional investor) decides to sell causing similar momentum on the downside.   When selling reaches absurd levels and the stock appears undervalued, a smart buyer starts a counter-trend.   This cycle can repeat over days, weeks or even months and with no pattern on the relative tops and bottoms.   This is why a stock’s price on any given day is not a reliable indicator of underlying value of the stock. 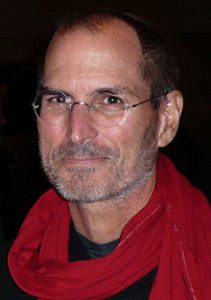 RIP Steve. You were great – you built a company that can thrive without you.

An example of this in investing follows.  Apple is a widely known company for its iconic products, popular stock and has a universally recognized brand name. During summer 2013, Apple’s run with its iPhone and iPad products seemed to be slowing as Samsung launched its flagship products to compete at lower price.  More so, people around the world believed that Apple cannot succeed without Steve Jobs.   To show confidence in the company’s future, Apple’s Board of Directors started the quarterly dividend in 2012.

Though Steve Jobs passed away in Oct. 2011, the legacy of new products he left at Apple, many believed carried them till 2013 and presumably, it “expired”  during summer of 2013.  I think an influential article in a business magazine started this theory that since 2 years had passed since Steve passed, Apple has nothing more innovative to offer.   Whatever they did until then was leftover from Steve’s ideas.   This confirmation resonated with public and investors, who began continually selling Apple stock to ridiculous levels (below $60, split-adjusted) during the summer of 2013.

We tend to believe the media and the carefully cultivated CEO persona that the company’s success is entirely because of that one individual.  I found it difficult to accept that a company that had design and tech geniuses like Steve Wozniak in the past, and Jonathan Ive as their current design head among others, can suddenly collapse and wither away.  The fortunes of a large company with a massive consumer brand (more valuable than Coca-Cola) and strong presence in over 160 countries cannot depend on one individual’s creativity alone.   A company that generated $171 billion in sales and over $37 billion in profit had to endure this negative headline in 2013 – you can see how how the mood was then.

I bought Apple stock during this pessimism in late summer 2013.  Having realized over 100% returns till now while receiving a steady flow of growing dividends, I can say not falling for that confirmation bias in 2013 has been rewarding.   I don’t mean to say I am good in stock picking (as I have my losers), but in this case, I saw the confirmation bias leading to ‘herd mentality’ so evident with Apple in 2013.   Just like with survivorship bias, probability thinking combined with the simple question ‘Is he the only smart person in such a successful, large company?‘ allowed me to make that decision to purchase Apple stock in 2013 when most people thought its best days were over.

And you thought these bias posts were only boring psychology?  You can make money by taking advantage of them!