A nice thing about my job is that I get to travel to new places to do business development work.  In the process, I get to savor gourmet meals in good restaurants and experience the local culture or sights, even if only for a couple of spare hours during a business trip.

You also gotta love that your business hosts want to take you to their best restaurants and give you a free meal! 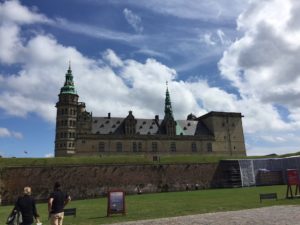 I recently had the privilege of visiting Copenhagen for the first time, for a business deal discussion.

It is Denmark’s clean and chic capital. What impressed me about Copenhagen, among many things, is the enormous density of high quality (and expensive) restaurants for a city just over 500,000 people.   Denmark itself has barely over 5 million people, so about 10% of the entire country’s population lives in and around the capital. 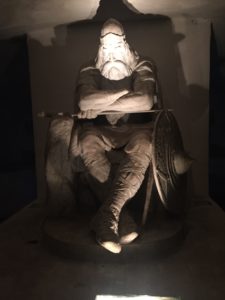 Holger Danske, waiting to protect Denmark during any crisis.

Most first time visitors would notice how expensive the city is, right from hotels, costly cabs (Uber is banned there!) and other services.   Danes pay one of the highest income tax rates in the world, and even goods and services are taxed at 25% value-added tax (VAT).  Yikes!  Even if you buy water at a restaurant, it is taxed at this rate, which I sadly discovered only when check came.   What the Danes enjoy, in return for heavy taxes, is excellent civic infrastructure, free education all the way till college and grad school, and also free, quality healthcare for life!

The country is, of course, beautiful, and I got to see the famous Kronburg castle (a UNESCO World Heritage Centre) with the famous Holger Danske that the Danes have great belief in as a protector of Denmark. 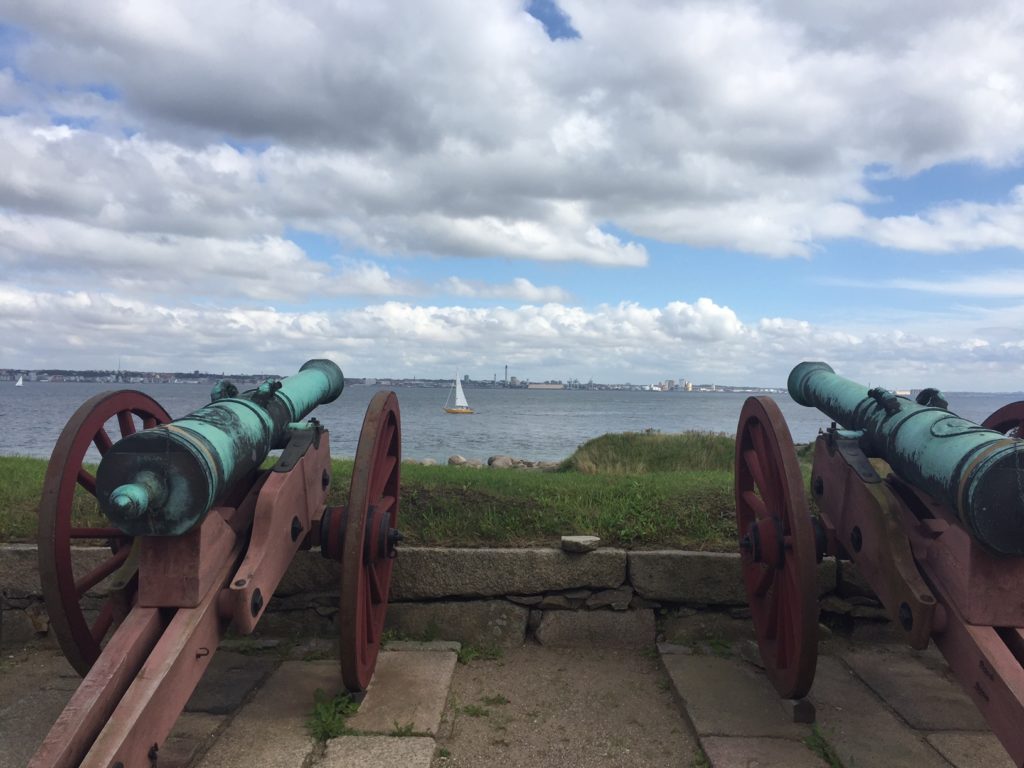 Canons ready to shoot ships that don’t pay toll – with Sweden on the other side.

The Danes clearly have a heightened sense of couture cuisine.  I was amazed to find many top class, even Michelin-rated, restaurants – and all of them busy on weeknights! – packed close to each other in Copenhagen.   Boy, the Danes are loaded, is the impression first time visitors get.   Take for example:  Copenhagen had Noma, ranked for four years, as the Best Restaurant in the World by Restaurant Magazine.  That’s some major praise for one remote Scandinavian city’s restaurant, when the world’s cities are filled with many amazing restaurants.   Notice I said “had”, because this Michelin-starred restaurant – at the peak of its glory – was shut down by its brilliant Danish chef Rene Redzepi who boldly ‘relocates’ his restaurant to other parts of the world to work his culinary magic.

I had heard of Noma earlier and was disappointed that I couldn’t eat there anymore.  As a vegetarian, my options are limited anyway but restaurants like Noma and others of that calibre often have great vegetarian dishes.   My gracious business hosts told me not to despair, “we have selected an excellent vegetarian-only restaurant in Copenhagen for you!”

Great, I thought, a “vegetarian-only trendy restaurant” is a code-phrase for blanched green beans and barely-filled stomachs.  Not wanting to share my concern with the hosts who put in this much effort to accomodate my eating preference, I kept quiet.

So, we went to a restaurant called Veve, which boasts “vegetarian world cuisine” and shows impressive ratings on its website.  I went along with my host and we started with a glass of nice German white wine.  Then, we indulged in a juice-paired prix fixe menu costing 1000 DKK (~$160) per person!  Boy was I glad that I wasn’t paying! This was the most expensive meal I have ever had in my life, and that even considers swanky restaurants in New York and Washington DC that I have had the privilege of eating on company expense accounts!

The menu had 6 starters, each bite-sized and creatively presented.   For example, “the slurp of the ocean” is a small seaweed-flavored tangy concoction of barely 30 ml (about an ounce) presented in a sealed plastic bag buried inside real beach sand with only a straw jutting out!

Just when I was thinking what the heck, am I supposed to eat sand now?, the waitress helpfully explained the “philosophy” behind the food and pointed helpfully to the black straw protruding out of the sand.   This was followed by bite sized snacks like Onion shell, salty soy meringue, provocatively named “nutty balls”, Swiss chard and ending with a flavorful mushroom tea. 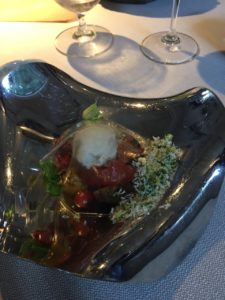 After the snack experience, we were led to a formal table for the main course to begin.  The warm walnut bread with ciabatta butter & premium olive oil was delicious and we quickly asked for seconds.  The main course started with a tomato salad (pictured above), paired with apple-celery juice.   The salad had a delicately spiced, and I am told, very rare, shaved cheese on it – don’t recall the name of that cheese, but from the way the waitress was guarding it, I presumed it wouldn’t be available at Kroger’s.

This course was followed by a baby radish with tangy sauce.   The bowl you see is a typical cereal bowl that we all use for breakfast, and the quantity is about 1/10th of it inside. 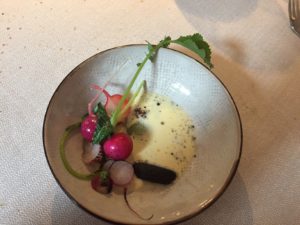 Baby radish in a tangy sauce with a stalk sticking out that the chef forgot to cut off.

This was then followed by a kale-topped salad dish, and for this dish the kale was crisped under liquid nitrogen (at -321 F/-193 Celsius!).   I was warned by the waitress not to eat it till the kale thawed and the smoke cleared.   So, this dish looks a bit like one from a wizard movie: 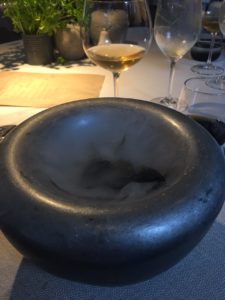 Abracabadra! Don’t get any on ya!

The next course was “young carrots with ginger-tamarind”, which the picture pretty much says so: 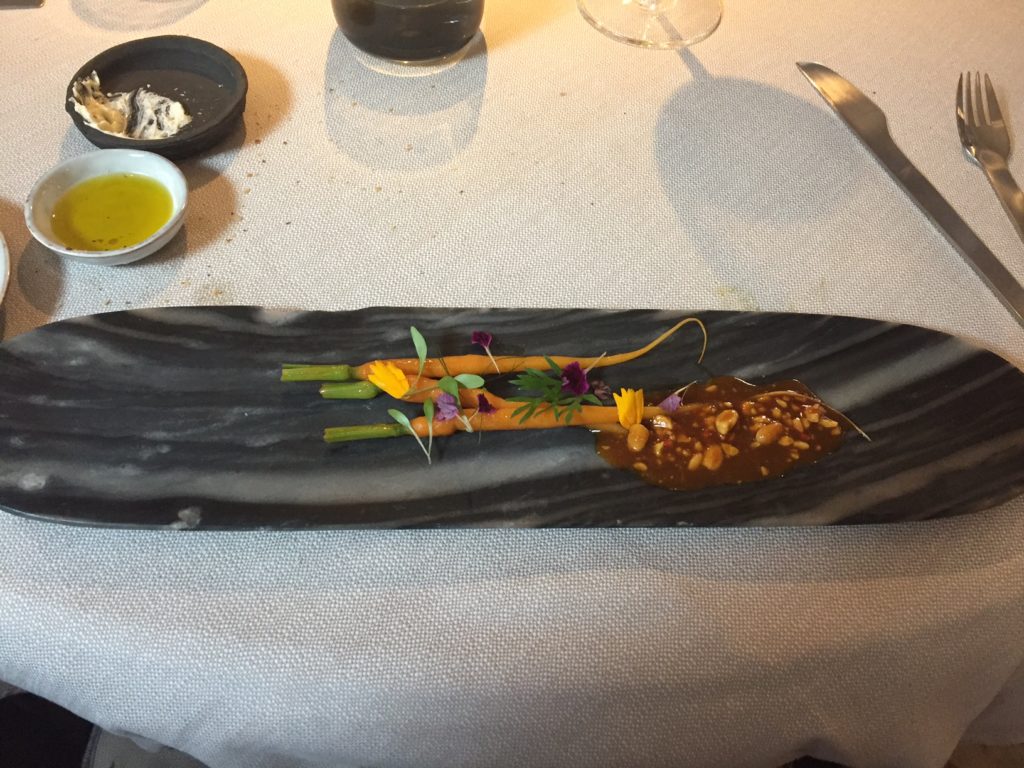 Three tiny carrots met with a premature death on this plate.

This was followed by “corn and chanterelle”, which is an interesting dish in that one part of it was very cold and the other one was warm – both in the same bowl.   See if you can call out the ingredients here – I couldn’t. 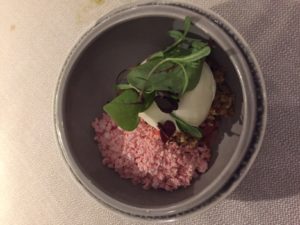 Feeling cold and warm on the same dish.

The last course was “new massaman potatoes”, which was supposed to be a twist on the Malaysian massaman curry with baked potatoes.   While the curry was nice, the chef forgot to bake the potatoes so they were very hard to cut into.   I ended up wasting the potatoes (didn’t want to end up with a bad stomach with nearly raw potatoes) but enjoyed drinking the the three spoons of massaman curry along with the crispy wafer provided. 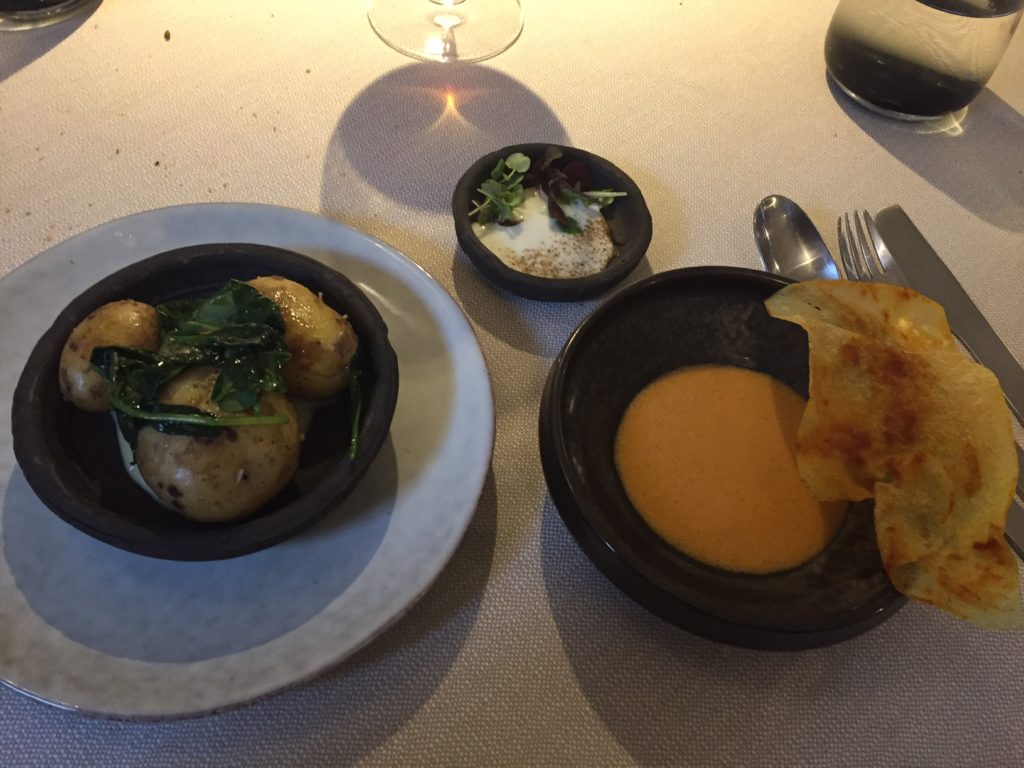 If only the potatoes were cooked with the curry…

So, there you have it.  A multi-course meal – each course looking like a tiny side dish or two spoons worth – needing over 3 hours to serve and costing $160 per person!   I get it that there is an upper crust of Society that enjoys this type of dining experience, but clearly, I am not part of it.  This was, in many ways, a unique experience, and one that I will probably never repeat.

This is perhaps the most expensive vegetarian meal on the planet!

When people complain about high living costs – especially, if a doctor is unable to make ends meet whereas a FIREd guy is living happily with modest passive income in the same city, remember that it is meals like the above that offer us a clue.  If people enjoy these kinds of ‘world class’ fine-dining experiences a little too frequently, even a reasonably high income would be no match for the lifestyle.

I will be the first to admit that this post has been incredibly narrow in its characterization of Denmark, which I find to be a beautiful country, with warm people and great social benefits for its residents.   During my visit, I reached out to Carl who blogs at MoneyMow to include his views on this post but unfortunately we couldn’t meet due to schedule conflict.   But there is a nice interview of Carl about life in Denmark at Buddha Money for those seeking a primer about a country that was ranked in 2016 as the happiest in the world.  Not to put too fine a point on it, the happiest country in the world according to 2017 ranking is Norway, but Denmark is right next at No. 2.

Despite all of Denmark’s culinary sophistication, I look forward to my value meal – pizza verdure – soon. 🙂 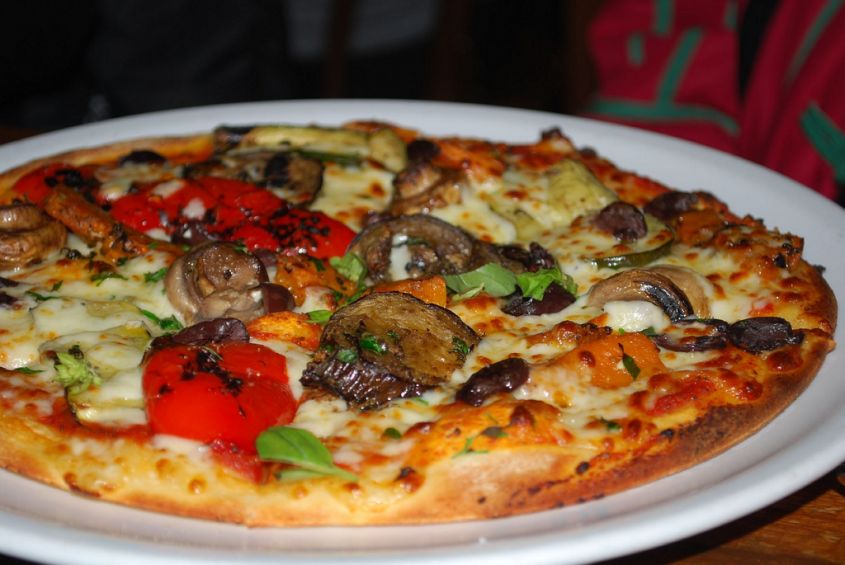 Pizza Verdure – what one plate fills, 10 of ‘elegant’ courses couldn’t.  Available for $10 at your friendly local Italian place.